What are WAX Tokens and What Do They Do? 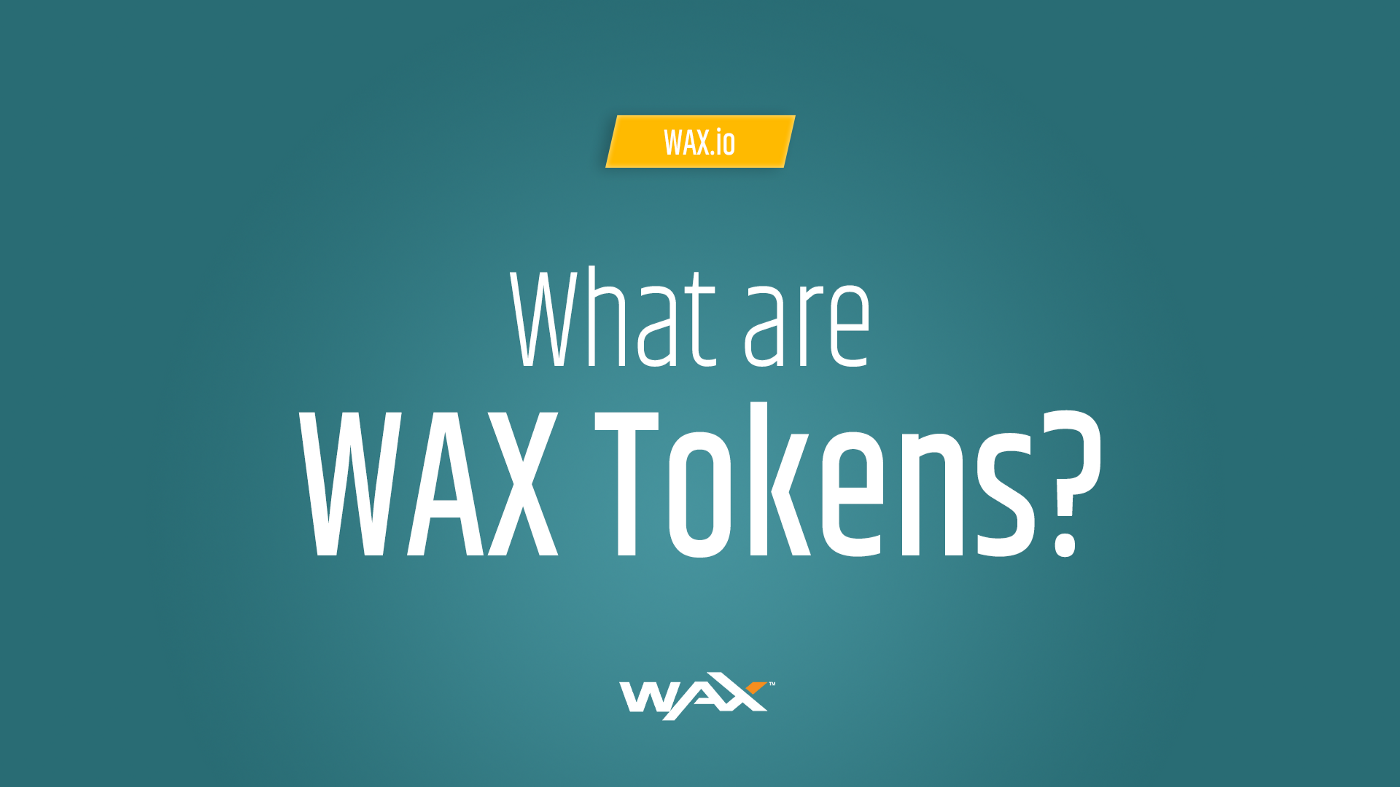 WWAX tokens are an integral part of the WAX Protocol. They include $WAXP, $WAXE and $WAXG. Confusingly, the terms ‘coin’ and ‘token’ are often mixed up. This is because all coins are tokens but not all tokens are coins. Coins are loosely defined as the native currency of a blockchain, while tokens sit on top of a blockchain as ‘secondary’ or ‘ancillary’ tools. Both can be written with a ‘$’ at the front of the 3-letter abbreviation – e.g. ‘$BTC’ or ‘$WAXP’ – to differentiate them from acronyms that refer to a blockchain, protocol, platform, dApp, or a smart contract.

i. What’s the Difference Between a Crypto Token and Coin?

Because $WAXP, $WAXE and $WAXG are all native to the WAX blockchain, rather than sitting on top of layer 2 networks, they are all technically coins. However, in official WAX literature, they are referred to as tokens—likely in order to highlight and emphasise their multiple uses and functions (rather than being simply units of value).

With this in view, let’s dig a little deeper into the differences between a coin and a token. The first distinguishing feature of a crypto coin is that it is ‘fungible’. This means any single $WAXP coin can be swapped or split up into smaller subunits without losing value. Roughly speaking, the $WAXP token is the equivalent of ‘money’ in the WAX ecosystem.

The next distinguishing feature of a crypto coin is that it is native to its own separate dedicated blockchain, such as $ETH on the Ethereum blockchain or $WAXP on the WAX blockchain,   where they act as the ‘money’ that pays for transactions, products, and services.

In contrast, there are various types of crypto tokens, but these don’t necessarily exist natively on their own blockchains. One other distinguishing feature of a crypto token is that it can represent not just a financial value, but also an utility value, both to users (individually) and also to the overall blockchain itself (collectively). Roughly speaking, if crypto coins are used to buy the products, WAX tokens tend to represent other things such as the deeds of ownership that can be traded or converted.

The next distinguishing feature of a token is that, unlike a coin (which is dumb), it often involves ‘smart contracts’ – bits of digital code that that facilitate specific actions and services on the blockchain associated with the token. You can find out more about how this all works in our previous articles about the Developer Hive and dApps.

Let’s now take a look at how WAX tokens evolved.

The Worldwide Asset eXchange™ (WAX) was launched in 2017 in an ‘Internet Coin Offering’ (ICO) as an ERC-20 token on the Ethereum blockchain. The initial token was simply called $WAX,
This old $WAX coin-token was ‘retired’ in 2018 when the WAX platform shifted away from the energy-intensive Ethereum blockchain to a ‘fork’ of the much greener EOSIO blockchain.

At this point WAX was in a position to get the benefit of having its own native coin on its own blockchain. Existing $WAX token holders were invited to swap their original ERC-20 tokens for a new EOS-based WAX coin, called $WAXP. In 2019, another token conversion program called the ‘Genesis Block Member’ program was launched, since when other tokens have emerged to adapt to the ever-changing landscape of Decentralized Finance (DeFi).

All three current WAX tokens – $WAXP, $WAXE, and $WAXG – are found at different stages of a WAX user’s activities and interactions with the WAX platform.

Let’s take a look at each one separately.

II. What is WAXP?

$WAXP is the WAX Protocol native crypto coin that acts as the basic currency for buying, selling, and trading digital goods such as NFTs. It is listed on many different crypto exchanges and it fluctuates in value.

In order to get properly started with WAX you will need some $WAXP in your crypto-wallet. Read our previous article about how to set up a Wax Cloud Wallet (WCW).

Using the WCW, your $WAXP has to be staked to gain the necessary system resources (called RAM, CPU, and NET). You also need enough $WAXP to execute any transaction or mint your own collection of NFTs. To find out how you can read our previous series of articles about the Atomic Hub.
If you are buying $WAXP as an investment vehicle, there are useful block explorers to help you monitor the price of $WAXP. You can also use these to stake and vote your $WAXP for block producers (BPs) in return for ‘rewards’. The more $WAXP you stake, and the more regularly you do this, the more rewards you will receive, which come in the shape of $WAXE and $WAXG tokens. This is all part of WAX tokenomics which you can read about here.

III. What is WAXE?

i. Why Was $WAXE Developed?

$WAXE is an ERC-20 utility token that was launched in early 2021 to bridge the gap between the WAX ecosystem and another very important blockchain: Ethereum. $WAXE tokens can also be found on various exchanges, which in some ways gives it the look of a coin, but strictly speaking it is still a token, a cross-chain solution between WAX and Ethereum.

Whereas WAX is ‘King of the NFTs’, Ethereum ($ETH) aims to become the ‘World Computer’, due to its being a major innovator behind the development of dApps and smart contracts which bring tokens to life and allow such things as NFTs to be bought and sold. Consequently, many new marketplaces for NFTs and collectibles will now be part of the WAX user experience.

The latest $WAXE token also gives users ways to trade and earn rewards inside the Ethereum space. Users can swap (burn) their $WAXP token for a $WAXE token (at pre-set rates) using a wallet such as Metamask and then stake these new $WAXE coins to receive further rewards.
In this new WAX tokenomic model, users are essentially providing their spare liquidity to the WAX ‘Economic Activity Pool’. Furthermore, by staking their new $WAXE tokens, users can collect either $ETH coin or the $WAXG (Governance) utility tokens as rewards. This all happens on regular distribution cycles called ‘epochs’.

As mentioned above, WAX will now move back into the wider Ethereum space. To understand why this new $WAXE token is so significant, consider the following analogy.

A traditional bank holds your cash. While you are asleep, the bank lends out your spare liquidity (cash) 24/7 – to investors in derivatives markets, lending overnight to other banks, buying and selling Forex, shorting oil stocks, etc. When you wake up, you still have the same cash balance, but the bank may have made a lot of money, and businesses across the world will be (hopefully) investing in new jobs and technologies, building schools and hospitals.

Or, as the official announcement put it:

Under the new WAX inter-blockchain tokenomic model, the operational functions of NFTs will be conducted on the WAX Blockchain, a chain optimized for that activity, while Ethereum will become the capital vault of the WAX NFT empire.

Having access to increased liquidity helps WAX invest in and fully deploy system resources to develop new technologies via the WAX Developer Hive or the AtomicHub as well as minimizing the cost of user transactions.

This economic liquidity pool keeps all the spare $WAXP busy. At the same time, the staking process supports the healthy development of the entire WAX ecosystem by encouraging users to vote for the best Block Producers (BPs) and the best development proposals, all of which keeps WAX as carbon-neutral as possible.

iii. How to get WAXE?

You can get $WAXE via your Wax Cloud Wallet (WCW) once you have been through the staking and voting process.

First, you need to convert your $WAXP to $WAXE and then choose from the following options:

You can find $WAXE by clicking into the WCW DeFi section on “Deposit WAXE in Liquidity Pool”. Once you do that a Uniswap modal will appear. This is where you are staking your spare $WAXE in the Ethereum Distribution Contract.

Your $WAXE tokens will now have moved from “Unstaked” to “Stake”. You will now receive rewards in the form of $ETH and $WAXG at the conclusion of every epoch. You can choose to un-stake your WAXE-ETH at any time.

If $WAXP and $WAXE are the financial side of the WAX tokens, then $WAXG is what is called a ‘utility token’.

$WAXG is what is called a ‘governance token’ and users can gain these as rewards when they go through the staking and voting process described above.

$WAXG plays an important role in the WAX Economic Activity Pool — a smart contract that accumulates a percentage of WAX fees and converts them to $ETH for later distribution to the $WAXE stakers or $WAXG token holders who decided to ‘stay in the game’ in order to gain more rewards.

Both types of WAX tokens (i.e. the coin-token and the token-tokens) are different facets of the tokenomics ‘glue’ that holds everything together in the WAX ecosystem which is based around modern DeFi (Decentralized Finance) and Web 3.0 technologies.

The main purpose of $WAXP coin is to provide the fundamental currency, while $WAXE tokens provide a cross-chain solution for trading with Ethereum blockchains and $WAXG governance tokens encourage users to participate in the healthy development of the WAX platform.

As the WAX ecosystem grows, it evolves.

In September 2021 WAX further extended its reach by listing $WAXP on the Binance, Gate.io, and AOFEX exchanges. In early 2022 WAX also announced the Ethereum Virtual Machine (EVM) which, along with the WAX Labs’ ‘WAX Token Fund’.

All this means new DeFi, GameFi, and other projects will soon be brought to the chain. The EVM will also allow Ethereum smart contracts to avoid the expensive ‘layer-1’ Ethereum blockchain and run on the much more energy-efficient, low-transaction-cost WAX blockchain.