What Makes WAX a Greener Blockchain? 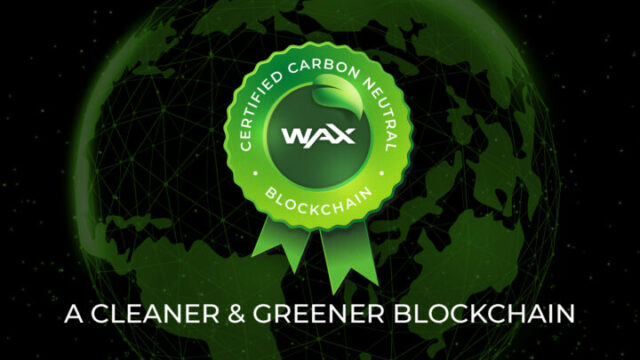 I. Introduction: What is a Blockchain?

Blockchain is a distributed ledger that records transactions of digital assets in sequential blocks. In a Proof of Work (PoW) blockchain such as Bitcoin, each block goes through an intensive computational task to ‘validate’ the block and earn the validator (or ‘miner’) cryptocurrency.

II. Why is Greenness / Energy Efficiency an Issue?

Greenness is an issue in blockchain because running the ledger can be very energy-intensive. For example, Bitcoin ($BTC) uses 0.5% of all electricity used annually worldwide – 91 TWh according to some sources, 121 TWh according to others. This translates to as much energy as Argentina consumes in a year, or the power used by the average US home for 6 weeks. The second biggest blockchain is no better – Ethereum ($ETH) apparently consumes 30 kWh per transaction.

i. What is a ‘Consensus Mechanism’?

A consensus mechanism is how all the nodes on the blockchain network verify all the transactions and agree on who creates (or mines) the next block in the chain. This is known as a ‘consensus mechanism’. The most common ways to do this are ‘Proof of Work’ (used by Bitcoin and Ethereum) and ‘Proof of Stake’ (used by Polkadot, EOSIO, and Cardano, among others).

Proof of Work is where all members of the decentralized network mine and verify each transaction at all times. PoW blockchains require computing power dominance to claim the right to mine a Bitcoin and to achieve consensus. The downside is that this involves a huge number of processes as each node is constantly checking the other nodes to make sure nobody is gaming the system.

iii. What is DPoS?

The Worldwide Asset eXchange™ (WAX) does things a bit differently. It uses a consensus mechanism called ‘Delegated Proof of Stake’ (DPoS). It relies on an ecosystem of users, nodes, and WAX token holders who engage in the running (governance) of the platform to achieve consensus.

Users vote regularly for 21 nodes (or ‘guilds’) to produce the blocks that store new data. WAX token holders vote on delegates (‘proxies’) that validate the new blocks. Voting power is weighted on a proportional scale relative to the number of tokens staked. As there are more than 21 guilds, efficiency and transparency are increased through the competition to create blocks.

iv. How is DPoS Greener?

DPoS is fuelled by staked tokens—not raw computational power—so it is much less energy-intensive. It also involves far fewer transactions to reach a consensus, is more scalable, and therefore inherently faster, again resulting in lower energy requirements. The energy consumption on the WAX blockchain is relatively stable and is estimated to use just 0.00023 TW per year – roughly 300,000 times less than Bitcoin.

v. What are Benefits Besides Greenness?

Besides being better for the planet, the DPoS system also benefits all users who engage with it. To make WAX work at maximum efficiency, all users have to actively support the delegation of the consensus algorithm – the method by which the blockchain remains healthy and strong. To encourage this, WAX has put in place a system called ‘tokenomics’ which rewards users for being engaged. The scrutiny of millions of WAX users is an essential component of keeping WAX the best NFT blockchain in the world. The rewards come in the form of $WAXE (Ethereum-based ERC-20 tokens) and $WAXG governance tokens. The more users are involved, the more they earn.

These are some of the energy-hungry ways blocks are ‘mined’ under the PoW consensus algorithm. WAX has taken a different path towards a greener, more sustainable future for digital trading and eCommerce using dPoS. To find out more about the features and benefits of this system, check out the other articles on our blog.